Visit of the French Ambassador to Canada in Vancouver

The French Ambassador to Canada Nicolas Chapuis payed his first official visit to Western Canada from March 25th till March 31th, 2015. A special occasion to expose his priorities during his mandate that just started January 9, 2015.

Climate change challenges at the forefront

On the road to the COP21 which will be held in Paris in December 2015, the Ambassador conveyed the idea of the necessary mobilisation from all the countries by publishing their national contribution.

The stakes are high: the aim is to reach, for the first time, a universal, legally binding agreement that will enable us to combat climate change effectively and boost the transition towards resilient, low-carbon societies and economies.

To achieve this, the future agreement must focus equally on mitigation - that is, efforts to reduce greenhouse gas emissions in order to limit global warming to 2°C - and societies’ adaptation to existing climate changes. These efforts must take into account the needs and capacities of each country. The agreement will enter into force in 2020 and will need to be sustainable to enable long-term change.

In partnership with Carbon Talks and the Pacific Institute for Climate Solutions (PiCS), the French Consulate general organized a public talk on March 26 entitled "From Local to Global Challenges, What Needs to Be Done for a Successful Climate Conference in Paris 2015? A Political Discussion on the Road to the COP21".

The dialogue was part of a series of free public events, called FACTS (French-Ameri-can Climate Talks) organized by the French Embassies and Consulates in North America.

More than 200 participants added valuable inputs to the discussions. 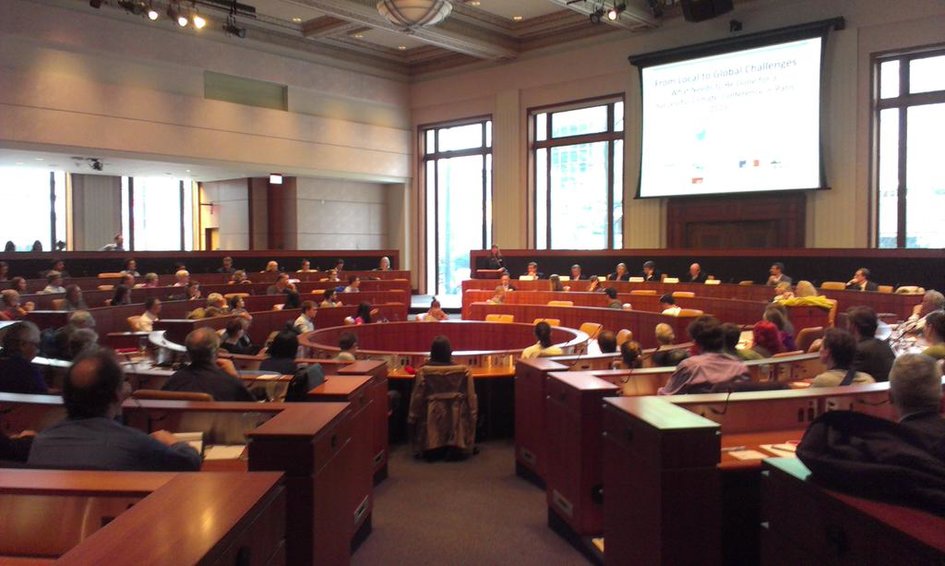 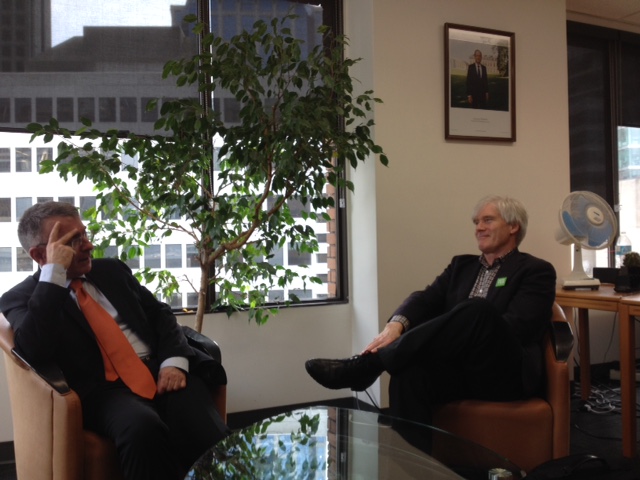 To go further, listen to some interviews the French Ambassador gave on the COP21:

Air France began service between Vancouver and Paris, France on March 29th, 2015. YVR welcomed the news with celebrations in the terminal and launched a special campaign entitled "France in the air". A meeting between French Ambassador and the Honourable Naomi Yakamoto, Minister of State for Tourism and Small Business has been arranged. 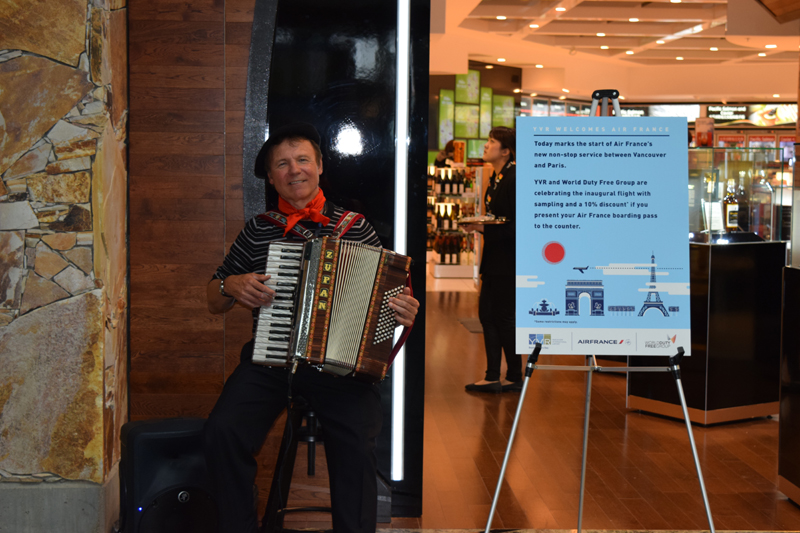 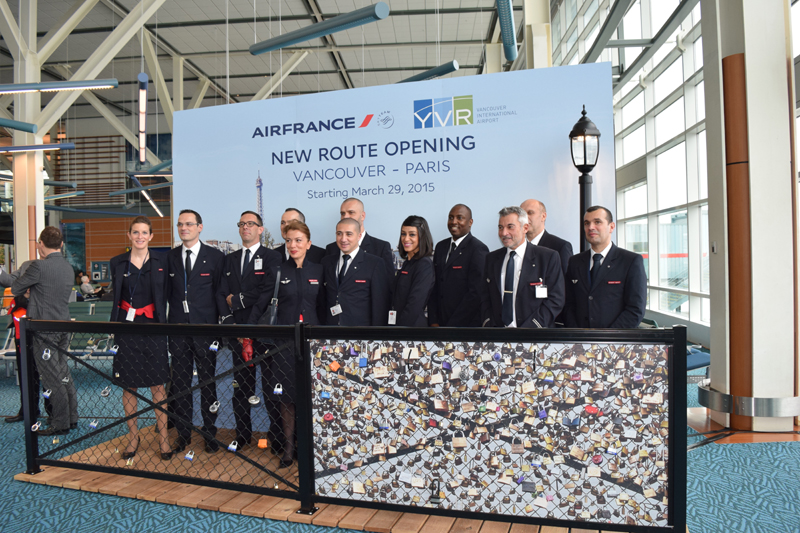 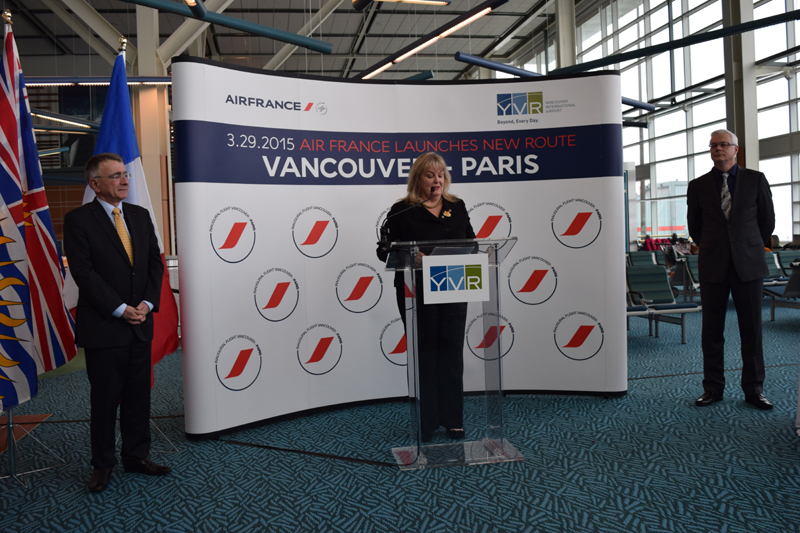 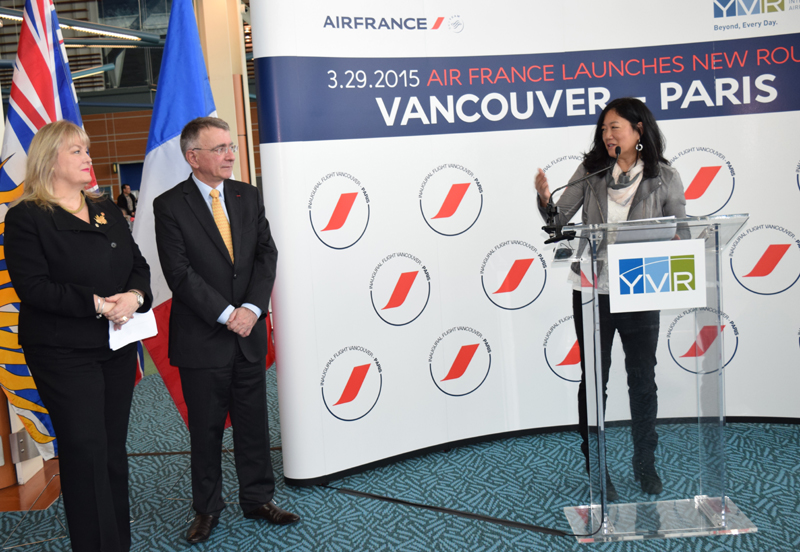 The French Ambassador to Canada also highlighted the importance of French gastronomy, only a few weeks after the successful Good France international day. Watch his interview by GlobalEat [English] and in [Mandarin]Read other article on the blog of the Vancouver Sun, Taiyangbao.com [Mandarin]

Meeting with the academic community

Nicolas Chapuis gave a public conference at the Liu Institute for Global Issues in partnership with the Asian Research Institute of UBC on "50 years of French Diplomaty in China: What did we learn?". 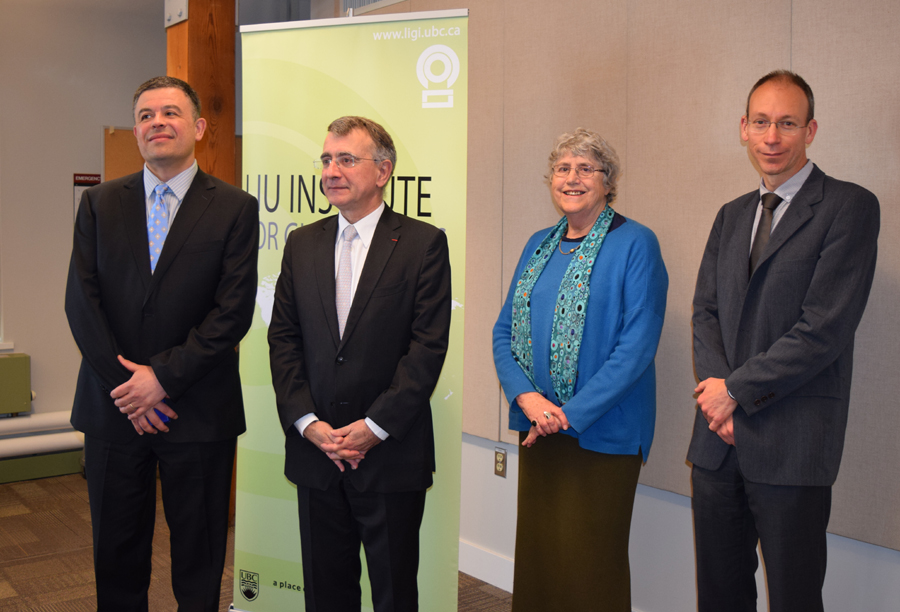 Aftermath the conference, a meeting between French Ambassador and the President and Vice-Chancellor of the University of British Columbia Arvind Gupta offered the opportunity to further discuss the role of innovation in the fight against climate change and ways to increase student mobility between France and Canada. 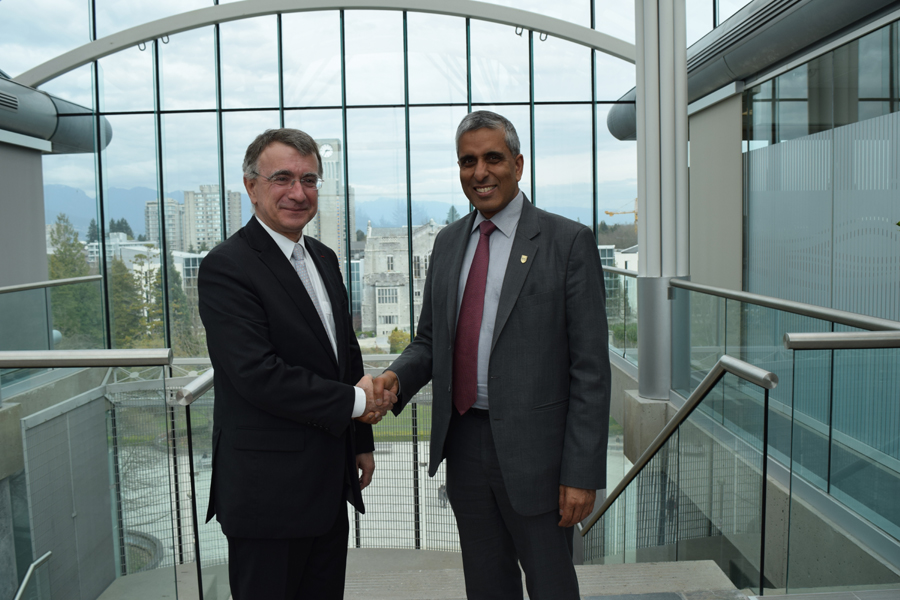 The French Ambassador also met with the CEO of MITACS Alejandro Adem. During the French president’s visit in Alberta last November, the signature of Mitacs-Campus France for Students mobility agreement between France and Canada regarding some Master Level and PhD Level research internships has been since then widely appraised.

Six Legion of Honor have been bestowed in Burnaby to D-Day veterans who landed on Normandy beaches on June 6th, 1944. The presentation was held in presence of the families, the Director of the George Derby Centre, and the President of British Columbia’s Remembrance Day Committee on March 27, 2015. 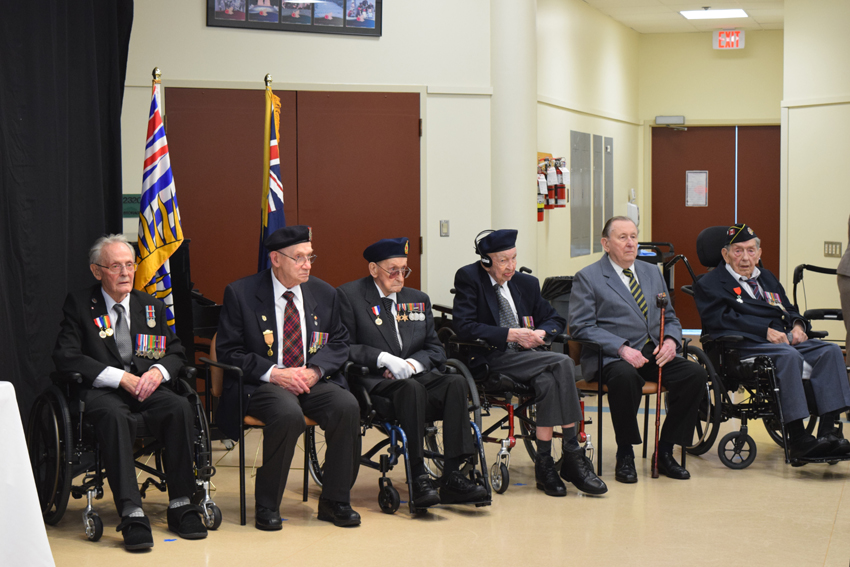 The 6 veterans before they received their Legion of Honor medal 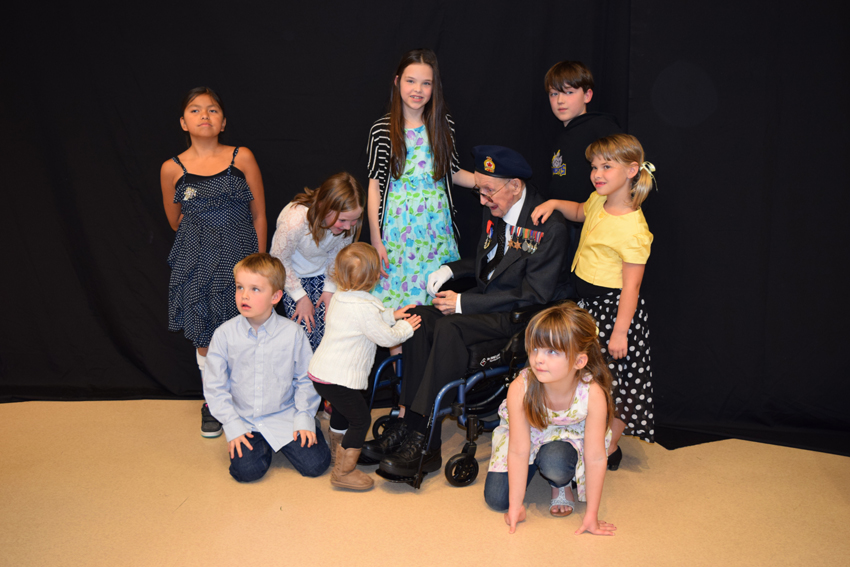 French Immersion School offers the opportunity to young students to practice and learn French through other disciplines than traditional language classes. Core school subjects are in fact taught in French. To aknowledge this effective and nonetheless famous school system in BC, the French Ambassador payed a visit to one of these schools in Richmond. More than 500 pupils aged 5-12 welcomed the Ambassador. 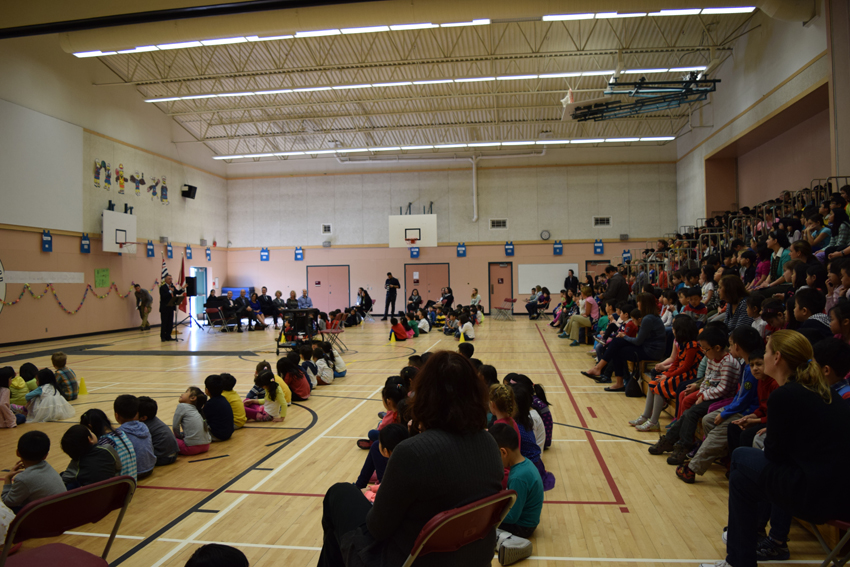 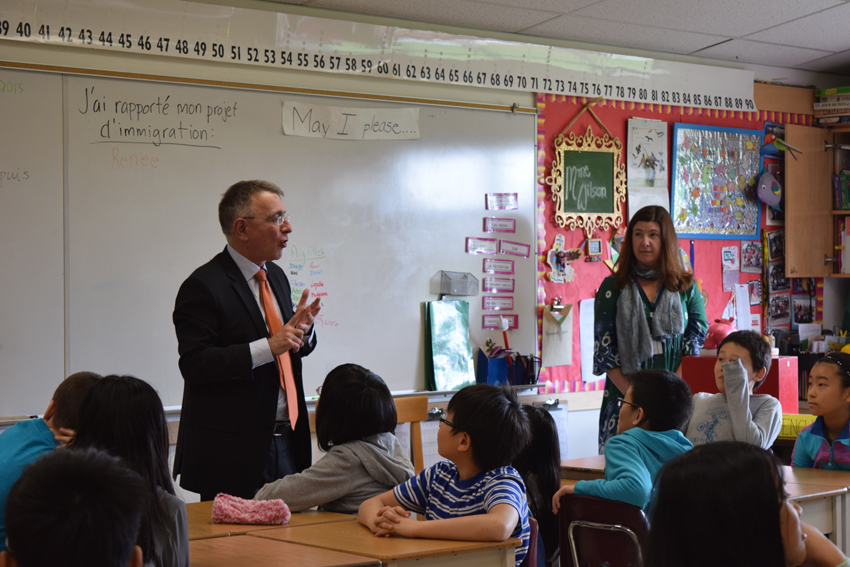 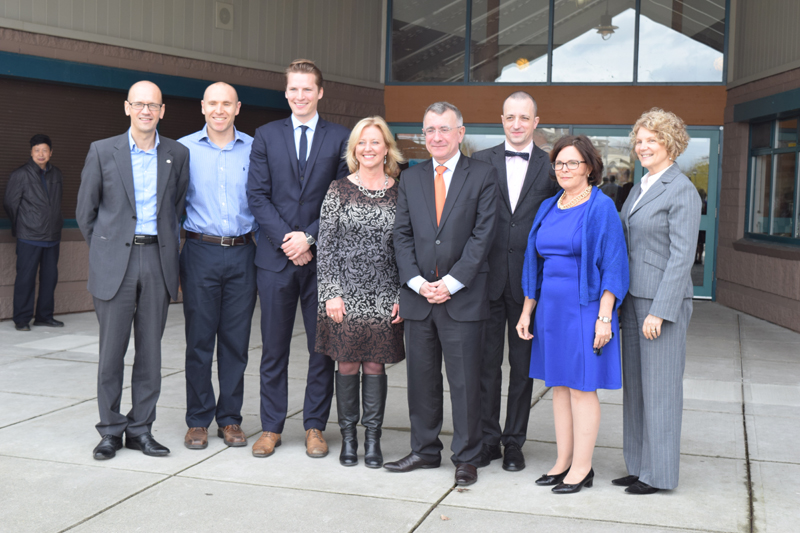