Home > Culture > Archive > 2015 Cultural events > Spotlight on France is back

Spotlight on France is back [fr]

Reception given in Vancouver for the Spotlight on France: 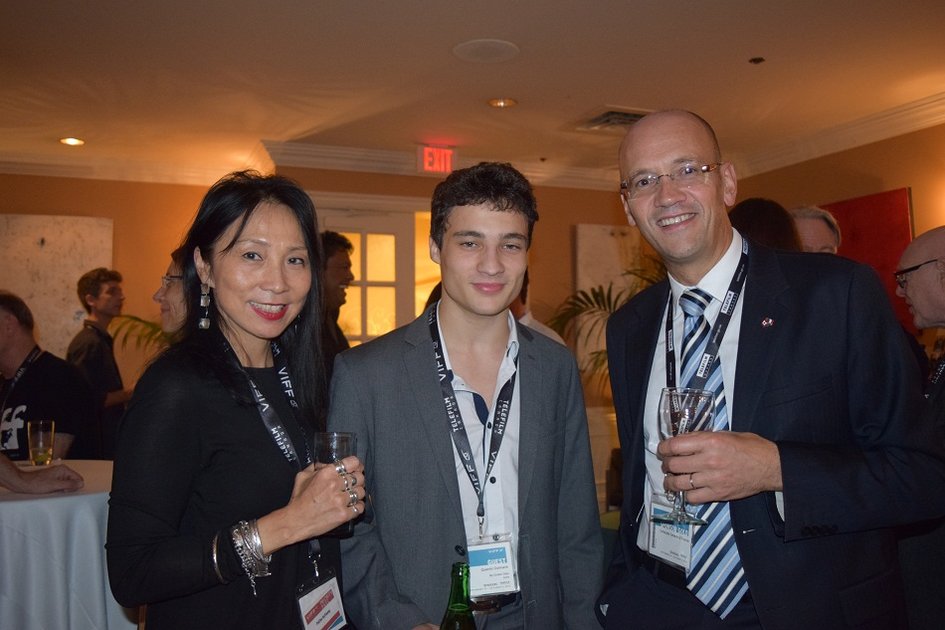 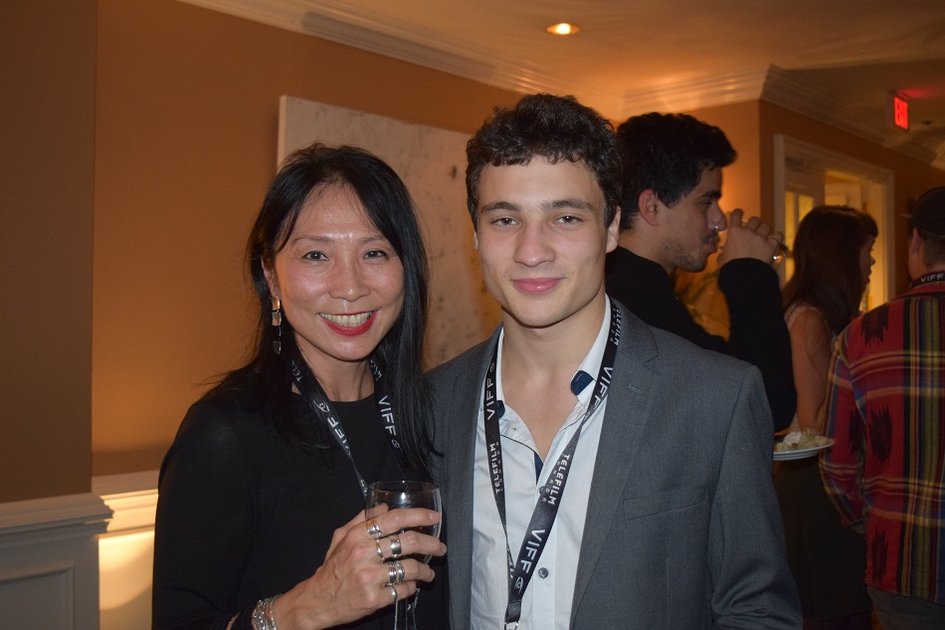 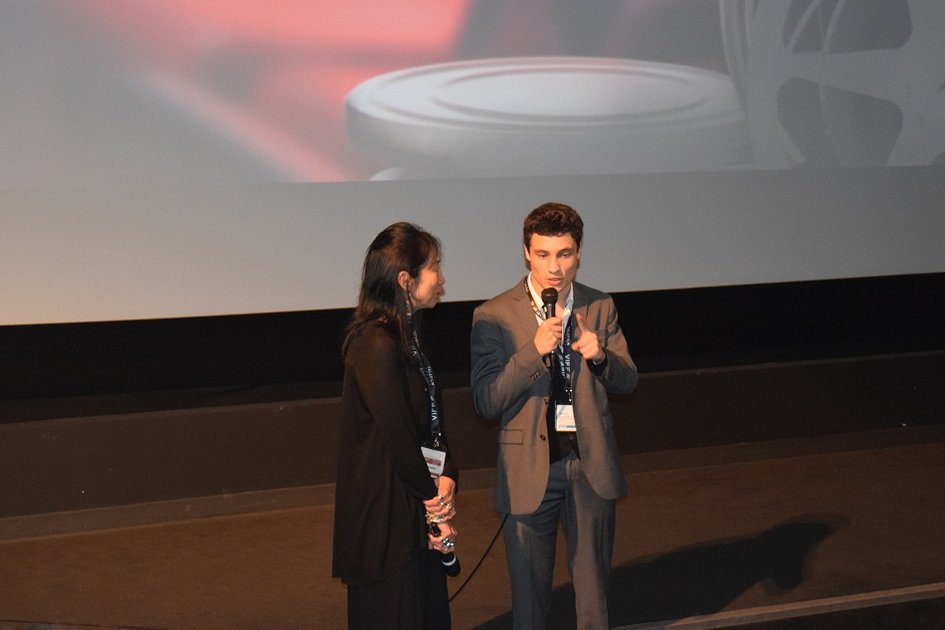 Q&A after the screening of "My Golden Days"

Jacques Audiard’s (A Prophet, Rust and Bone) latest dramatic inquiry into life on society’s margins is an alternately gripping and tender love story focusing on the plight of three Sri Lankan immigrants in the banlieue of Paris who struggle to adapt to their new hostile locale, while battling elements from their past.

The titular Dheepan (writer and activist Antonythasan Jesuthasan), a Tamil Tiger in the Sri Lankan civil war, is forced to improvise a family with Yalini (Kalieaswari Srinivasan) and the nine-year-old Illayaal (Claudine Vinasithamby) in order to escape their ravaged land for the possibilities of a new life in Paris. Once there, these three strangers become close out of necessity—the language and customs are unknown, the tenement they live in is home to criminal gangs—but this closeness eventually blossoms into something much deeper. But the violence of the banlieue encroaches further and further into their lives, until Dheepan has to make use of the chilling skills he acquired as a rebel soldier…

Two of France’s greatest young stars—Tahar Rahim (A Prophet) and Adèle Exarchopoulos (Blue Is the Warmest Colour)—are at the centre of Elie Wajeman’s exhilarating drama. A cop (Rahim) in Belle Époque Paris insinuates himself into an anarchist cell, only to find his loyalty wavering when he falls for the sensual Judith (Exarchopoulos)... "A vastly entertaining police-infiltration thriller that uses fin-de-siècle radicalism as an exquisitely atmospheric backdrop..." — Guardian

This assured, astute biopic from the late René Féret actually winds its way through an entire formative decade for the physician-turned-playwright (Nicolas Giraud) as he discovers his voice and purpose, and intrigues us at every turn. “This can be credited not only to Féret’s precise writing and direction but also to the strength of Giraud as a performer, as he manages to project his character’s emotions with just a look or the tiniest of facial movements.”—Hollywood Reporter

In Alice Winocour’s taut, beautifully controlled drama, an Afghanistan veteran prone to panic attacks (Rust and Bone’s Matthias Schoenaerts, indelible) is hired to protect a wealthy businessman’s wife (Diane Kruger) and child at their luxurious coastal estate. Are the dangers he detects real or are they just PTSD symptoms caused by his war-time experiences? "A pulsing, sexy thriller… Schoenaerts at this point should be certified as a genuine movie star."—Vanity Fair

In the Shadow of Women / L’ ombre des femmes

Male narcissism and infidelity are analyzed in veteran Philippe Garrel’s gorgeously shot (in 35mm!) B&W drama about a married documentary filmmaker (Stanislas Merhar) who falls for a younger woman… "The currents of desire, jealousy and resentment that flow through a relationship over time receive an exquisite close-up from director Garrel in [this] tightly focused romantic drama that exudes… the lucid craftsmanship of a filmmaker in full command of the medium."—Variety

Article to be read in The Georgia Straight

Based on a short story by Doris Lessing, Jean-Paul Civeyrac’s subtle, emotionally resonant drama about class and race looks at the life of the titular character (Guslagie Malanda, a revelation) in her roles as lover, mother and black woman in modern Paris. When the orphaned Victoria, age 8, is invited into a well-to-do (white) artsy couple’s bourgeois home, her view of the good life sets in motion a chain of events that will reverberate into her adulthood…

An emotionally piercing youthful romance between the adolescents Paul (Quentin Dolmaire, terrific) and Esther (Lou Roy-Lecollinet), told in flashback from the adult Paul’s (Mathieu Amalric) perspective, Arnaud Desplechin’s (A Christmas Tale) supremely intelligent drama is visual storytelling at its finest. "Rich and intensely personal… A roving, restless tale, [it features] some of the most fluid, emotionally resonant filmmaking of Desplechin’s career…"—Variety

A filmmaker (played by director Bertrand Bonello) in search of the definitive image of "the monstrous" forms the backbone of Antoine Barraud’s fascinating mélange, one part drama, one part art history lesson, one part homage to past cinematic masters Buñuel and Hitchcock. Jeanne Balibar and Géraldine Pailhaus (playing the same art historian) accompany our intrepid director through a tour of some of Paris’ most quixotic museums. The effect is "spellbinding."— ArtForum

Catherine Deneuve, as a concerned judge dealing with delinquent youth, and newcomer Rod Paradot as Malony, the teen offender she counsels, are the twin poles in Emmanuelle Bercot’s sobering drama that traces ten turbulent years in Malony’s life. As Malony is shuffled from agency to agency, "Bercot studiously avoids the sort of catharsis-oriented pop psychology the genre so often peddles… [while] taking a page from the Dardenne brothers’ brand of social realism…"—Variety

Alix Delaporte’s quietly affecting drama gives us 14-year-old Victor (a captivating Romain Paul) who lives in a trailer outside Montpellier with his very ill mother (Clotilde Hesme). Preparing him for life after she’s gone, she puts him in touch with the father he’s never known—an imposing orchestra conductor who’s just arrived in town to perform Mahler’s Sixth Symphony… "An intimate drama in which words play second fiddle to situations and images."—Hollywood Reporter

The Measure of a Man / La Loi du marché

The zero-sum game that is the "law of the market" (the French title)—wherein if one wants a job another must be let go—lies at the heart of Stéphane Brizé’s profoundly humanist drama. Vincent Lindon is superb as an unemployed mechanic whose new job in security at a big-box supermarket forces him to make decisions that go against everything he believes in… "A powerfully affecting social drama… Lindon [gives] a veritable master class in understated humanism."—Variety

Every time Vincent dives into a lake, the introvert transforms into something uncanny, leaping like a dolphin and brandishing superhuman strength. If there were a villain to vanquish, he’d be a superhero. Instead, he’s left to wrestle with the very relatable fear of falling victim to persecution. “So persuasively does debut director-actor Thomas Salvador immerse the viewer in his imaginative world that it seduces entirely, in a silent comedy kind of way…”—Hollywood Reporter

We Did It on a Song / Chante ton bac d’abord

Documentarian David André follows five teenagers from depressed Boulogne-sur-Mer throughout their final year at school, with the life-determining "baccalauréat" exams awaiting them at the end. Their lives, dreams and ambitions are captured in poetic visuals, in songs that the teenagers themselves provide, and in a captivating mélange of anger, humour, frustration and boredom…"Glee meets To Be and To Have… A touching film, [this] hybrid French docudrama-musical comedy… deserves extra credit for trying to pull off something new."—Hollywood Reporter

Chante ton bac d'abord (We did it on a song) - Trailer from CAT&Docs on Vimeo.

Article to be read in The Georgia Straight