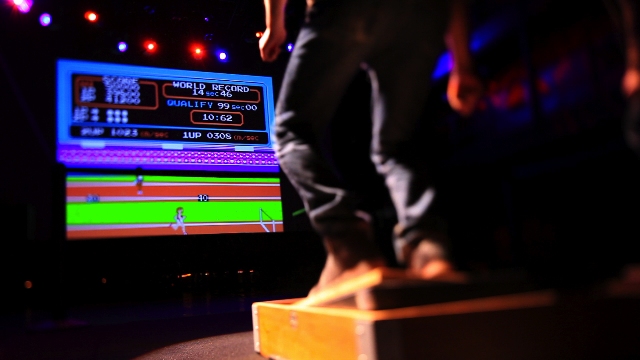 Evolution of Gaming was a highly interactive event that explored the history of gaming from its earliest roots. It took place at the Centre for Digital Media in Vancouver, BC, from August 1 ‒ 10.

Noted French games curator, Isabelle Arvers had the initial inspiration but was quickly joined by MDM Faculty Kimberly Voll and Malcolm Levy in the design. This powerful team has created an event with a special look at the unique role that Vancouver and France have played in the industry’s beginnings.

Free to the public, Evolution hosted 300 participants per day at the 10-­day event. Guests had the opportunity to engage with various exhibits, including a special virtual reality exhibit, as well as the chance to see the very first commercially available arcade cabinet.

Interested visitors could schedule their blast into the video game past on the exhibition’s website: http://www.evolutionofgaming.ca. Registration opened on May 26, 2014. Special VIP access and by-­‐invitation-­‐only opening and closing events for sponsors, industry influencers and leaders, and special guests have also been planned.

During the opening event, special guest, French artist Djeff Regottaz, presented his world-­‐ renowned work Hyper Olympic, featuring a tournament for attendees. Hyper Olympic is an interactive installation for two that allows players to engage in a remake of Track & Field, with a very physical interface. It has now become a staple at festivals worldwide.

Role of France in the gaming industry

The Consulate General of France in Vancouver was a major sponsor of the Evolution of Gaming and had been instrumental in supporting the event from the onset.

The influence of France on this exciting industry was also spotlighted. Assassin’s Creed, Raving Rabbids, Just Dance, Dishonored, My Brute… these adventures were all created in France, one of the largest producers of video games in the world and a pioneer in the field of development ever since the 1980s. The national industry, buoyed by tax credits, remains very dynamic with $4 billion (Canadian dollars) of annual income and 300 companies, a quarter of which were established over a decade ago, with giants like Ubisoft and Vivendi Games. Boasting more than 31 million regular players, more than any other country in Europe, France also offers a highly skilled pool of talent with strong engineering and artistic profiles who have made their way in the industry worldwide.