For its 11th edition, New Forms Festival has invited the electronic music composer Murcof and the visual designer Simon Geilfus from the European visual label AntiVJ. Their performance occured at the Omnimax of Science World, Vancouver on September, 19th. New Forms Festival has been classified by renowned music online magazine resident Advisor as the 6th best festivals in the world for the month of September 2014. 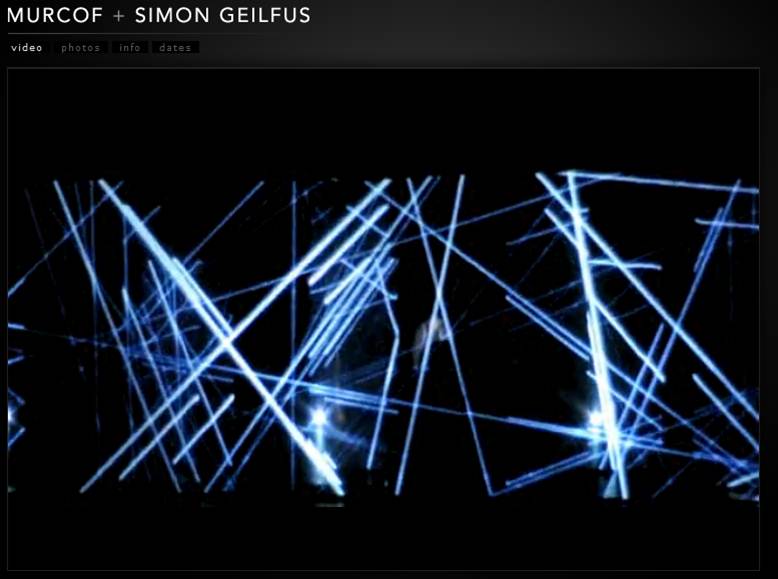 Brooding electronics and classical sound sources combine in the integrated sound world of Murcof.There is a limitlessness to his music that absorbs the listener, touching on themes of life, death and eternity. Now these preoccupations find a visual analogue courtesy of Simon Geilfus’ real-time panoramic projections. The giant screen of Omnimax is vast and semi-transparent, allowing for a fully immersive environment in which microscopic particles, geometric grids and organic elements are mapped in wondrous 3D perspective. 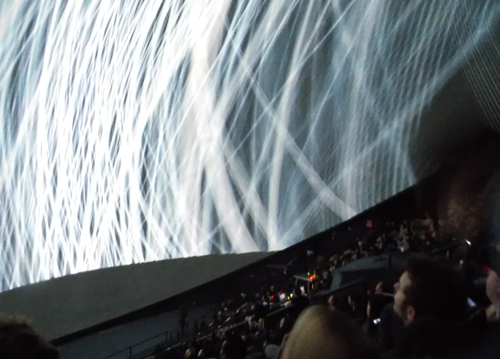 Murcof and visual label Antivj first crossed paths at 2007’s Venn Festival in Bristol, where they collaborated on a special installation at the city’s Planetarium. The show has constantly been evolving since its first performance at Manchester’s Futuresonic Festival in 2009, regularly headlining 1000/1400 capacity theatres around the world (Teatro de la Ciudad & Fonoteca in Mexico, London’s Hackney Empire Theatre, Arma 17 in Moscow, CmODA in Beijing, Ravenna’s classical music festival in Italy).

Antivj is a visual label initiated by a group of European-based artists whose work is focused on the use of projected light and its influence on perception.

Clearly stepping away from standard set ups and techniques, Antivj produces installations and live performance to challenge the senses.

Taking visuals away from the restrictions of flat rectangular screens and into the real world, Antivj artists transform objects, sculptures or buildings into hypnotising canvasses to create immersive site-specific experiences.

Starting a webdesign career at the time when Processing was released and the Flash Hackers Community got big, Simon quickly got sucked in creative coding, computational design and generative graphics.

Designing tools and new approaches for graphic and motion design has become one of his major interest. He enjoys as much creating graphics and visual abstractions as creating the softwares and systems to generate them. His visuals are triggered through the sound, giving the audience an extensive and coherent experience.

Murcof is a very modern composer, who utilizes technology to make epic, moving suites of music with a spiritual undertow. He draws on minimalism, post modernism and baroque music to create music that moves the mind and heart. His work draws on his childhood exposure to pre-20th century classical music and his passion for electronic pioneers like Jean-Michel Jarre and Tangerine Dream as a teenager, as well as his experiments in noise with his pre-Murcof doom/avant garde outfit, Elohim. He has released 3 critically acclaimed albums and an EP on The Leaf Label.

Murcof’s international reputation as a staggering live presence has been enhanced recently with a number of special collaborations, including events at Greenwich Planetarium (in collaboration with the Royal Astronomer), Montreaux Jazz Festival (collaboration with Talvin Singh & Erik Truffaz) and L’Auditori at Sonar Festival in Barcelona (with the pianist Francesco Tristano). In 2008 he toured a new work called ’Oceano’ in collaboration with classical musicians BCN216 and light sculptor Flicker.

To be read, a review of the show published in the Canadian magazine on emergent music, Exclaim!

With the support of the Consulate General of France.